Kristi Brodin
JavaScript is disabled for your browser. Some features of this site may not work without it. 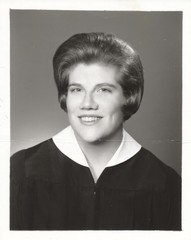 Kristi Brodin is one of the key people in the history of Northwest College Athletics. She is a person who has been a leader, encourager, worker, servant, coach, teacher, and pillar of strength in the last thirty years for Northwest College. We proudly and affectionately honor her in this publication. In spring of 1970, President D.V. Hearst and Academic Dean Frank Rice learned of a senior PE major and two-sport standout athlete at Seattle Pacific, who, with her strong Christian heritage, might consider a part time position teaching Physical Education oat Northwest College. The interview process convinced them that Kristi Brodin was the woman for the job: little did they realize that legacy they were helping to begin.

Commuting from Olympia two to three days a week that first year, 22 year old Kristi took the opportunity to form a women’s volleyball team to compete at a one day tournament in Portland for the league of small Christian colleges of which Northwest was a part. Borrowing her parents’ car to transport the team, Kristi and her players financed everything on their own in those early years, from team shirts to meals and travel expenses. Within a couple of years, this endeavor grew to regular season competition, which began with matches played as a prelude to men’s basketball games.

Having completed her master’s degree in Counseling and Guidance in 1976, Kristi became a Resident Counselor in the residence halls, as well as teaching and coaching two sports. The surge of interest in women’s athletics during the mid-seventies enabled the league to bring in women’s basketball during the 1977-78 season, moving volleyball to the fall. Kristi led her new basketball team to the first ever conference tournament championship in the inaugural season.

In 1984, having won the basketball league, Kristi was pleased to learn that her request to take the team to the National Christian College Athletic Association Division II national tournament would be granted. The team traveled to Tennessee Temple University in Chattanooga and won two of three games to place fifth. After a strong 3Kl place finish the next time they went to nationals, 1988 saw the beginning of a stretch of five national titles over seven years. Kristi was honored as national Coach of the Year in 1989.

Meanwhile, the volleyball team was flourishing as well. Breaking into the NCCAA national tournament in 1989 and placing third, they qualified again in 1992, and in 1993 placed 2nd in the nation, narrowly missing the championship in a grueling five game match. The demands of two-sport coaching atop teaching responsibilities prompted Kristi to turn the volleyball program over to the more than capable hands of Ross Johnson. Meanwhile, as basketball coach and as a recognized leader in the NCCAA, into whose Hall of Fame she was inducted in 1995, she helped to guide Northwest during the first year of full participation in the NAIA, the team made its first appearance ever at the Division I NCCAA nationals, and logged its first NAIA conference victory.

Additional items about Kristi Brodin are available in the Archives. Selected items of general interest are listed below.