Bessie Guy McMullen
JavaScript is disabled for your browser. Some features of this site may not work without it. 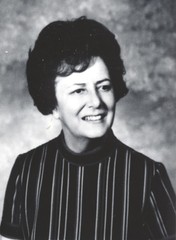 One of the most colorful personalities to be found on the campus is Dean of Women Bessie M. Guy. Miss Guy first joined the Northwest College staff in 1956, serving as secretary to the President and Assistant Registrar until 1958 at which time she succeeded Mrs. Mollie Perks, who retired as Dean of Women.

Bom in Seattle, Miss Guy received her education there, matriculating in the University of Washington in 1933-35 and thereafter enrolled in Northwest Bible Institute in 1935 to 1938. It was while in Northwest that she found Christ as her Saviour, she testifies. Upon graduation with her diploma in 1938 she entered Christian service, pastoring an Indian Assembly until 1942 and thence entered into Christian education work in Bremerton, and Oakland, California, before coming to the College. She also worked extensively in Vacation Bible School work in Northern California and in the Northwest district.

In her professional work as Dean of Women, Miss Guy organized a regional chapter of an organization known as the Christian Association of Deans of Women in the Northwest and served as its regional chairman from June 1961 until 1967.

Upon entering the service of the college in 1956 she took further academic work towards her B.A. degree and was graduated with honors in 1959. At this time, she was honored with membership in the Delta Epsilon Chi Honor Society.

In her role as Dean of Women, Miss Guy counseled women students, advised the women’s dorm council, the Associated Student Women’s Association, served as employment service agent for all students and served a number of other functions related to student welfare.


The Northwest College Board of Directors took some significant actions during its January meeting just concluded, Dr. D. V. Hurst, College president announced today. Among them was an action to rename the Women's Residence Hall "Guy-Perks Hall" in honor of retiring Dean of Women, Bessie Guy and the former Dean of Women, the late Mrs. Mollie Perks for whom the north wing was previously named.

Additional items about Bessie Guy McMullen are available in the Archives. Selected items of general interest are listed below.