Hubert J. Secrist
JavaScript is disabled for your browser. Some features of this site may not work without it. 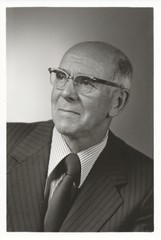 Mr. H. J. Secrist, the construction superintendent for the campus development program, is a man of faith and consecration. Long before he had been invited to be a member of the Campus Planning Commission the Lord had spoken to him that he was to help build the new college for NBC. When an invitation was given Brother Secrist to become a member of the Commission he gladly accepted the appointment stating he believed the project was of God. This statement of faith was due largely to his own experience with the Lord and he felt he was being divinely led to take this step.

Later when a construction superintendent was needed and when Mr. Secrist was asked to serve he again readily accepted saying, "I m sure this is of God for He has spoken to me on this matter too."

A few months later Brother Secrist sold his Olympia home and built a new one at Kirkland. Even though the College still did not have the property, yet he took another step of faith. Days and weeks went by, job after job of short duration came and he was able to continue earning his living during the waiting period, yet his faith did not waver but steadfastly he declared, "God is in this. We will have the property."

The awarding of the property to the Northwest Bible College came as no surprise to Brother Secrist for he had already stated, "I have never doubted but that this would be the outcome."

Mr. Secrist is well qualified to be the superintendent—first because of his sincere devotion and unswerving faith in God and secondly, because of his skill and know-how through years of construction work as superintendent on large jobs and a contractor. Praise God for men of vision and faith who will devote their skills to the service of the Lord.


Mr. Hubert Secrist of Kirkland was appointed to fill a new post created by the College Board of Directors in its June Meeting --- that of Superintendent of Buildings and Grounds. Mr. Secrist is a familiar figure on the campus, having served as construction superintendent in the erection of ail ten buildings which thus far have been built on the campus. He is currently supervising the construction of the eleventh, the new college chapel. In his new post he will oversee the maintenance, repair and routine development of the buildings and grounds. These duties have formerly been carried by the Business Manager but have now grown to a work level requiring full-time supervision.


Receiving the Delta Tau Order of Honor Award, Mr. H. J. Secrist of Olympia served for seven years as Construction Superintendent in the construction of buildings on the new College campus.


Additional items about Hubert Secrist are available in the Archives. Selected items of general interest are listed below.